Baked chicken nachos are a type of nachos that are made with diced or shredded cooked chicken and other toppings. They are typically baked in the oven until the cheese is melted and bubbly, and are often served as an appetizer or snack.

To make baked chicken nachos, tortilla chips are arranged in a single layer on a large baking sheet or in a shallow dish. A layer of diced or shredded cooked chicken is then spread over the top of the chips. The nachos are then topped with cheese and other toppings, such as diced tomatoes, onions, jalapeno peppers, and black beans. The nachos are baked in the oven until the cheese is melted and bubbly, and are then garnished with additional toppings such as chopped cilantro, diced avocado, or sour cream. Baked chicken nachos are a delicious and satisfying snack that are sure to be a hit with any crowd. 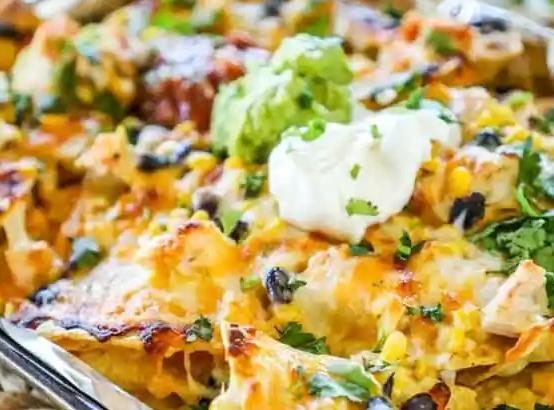 Bread and Butter Pudding with Croissants

Rebecca Hopkins - October 10, 2022
One of the most delicious chicken dishes, very tender and my favorite dish. Cooking in a slow cooker allows you to relax and do...