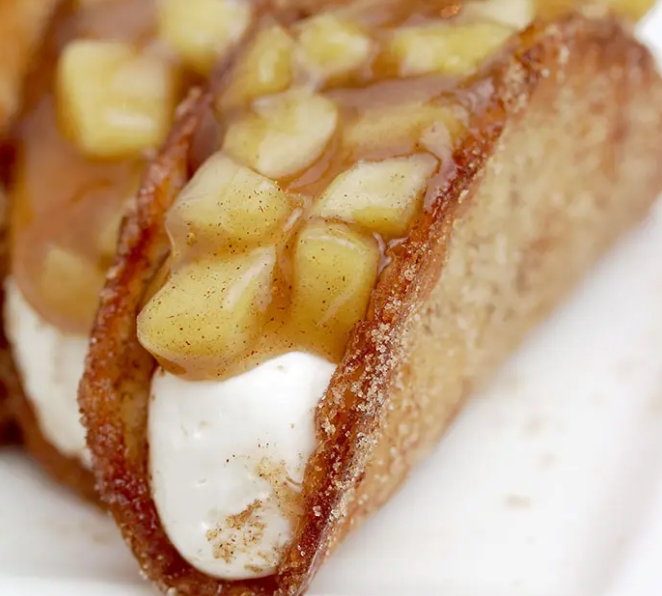 2Heat 1 inch oil in a pan, the temperature should be medium. Put tortilla circles, using tongs, in the oil and fry for about 10-15 seconds, then turn the circles on the other side, fold them in half and fry until they become golden brown. Take them out of the pan and wait for a couple of seconds for the extra oil to drain, then IMMEDIATELY put in the bowl with sugar and cinnamon. Cover the shells completely with this mixture. Put some of the mixture inside of the shell, as well.

3Finally, place them on the upside down muffin tin. Repeat the same procedure with the rest of the circles.

4TO MAKE HOMEMADE APPLE PIE FILLING – In a medium size dish, pour water, add cornstarch, brown sugar, cinnamon, nutmeg and cook for about 2-3 minutes, at medium heat, until it thickens, stirring from time to time.

5Add apples and vanilla extract and cook for 10 minutes, or until the apples soften. Remove from heat and let cool at a room temperature.

7Put the mixture into a piping bag and cut off the peak. Fill the shells with cream cheese filling and put apple pie filling on top of it.

Notes:
Keep refrigerated up to 3 days. It could be made the day before and kept in the fridge.

I would recommend you Vegetable Oil.

The day after the shells could become more soft.

The form of tacos you get by folding tortilla circle while frying in deep oil. Use tongs to do that. Folded tortillas should be put in an upside down muffin tin, so that filling of tortilla shells is easier.